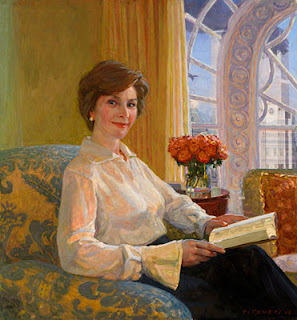 “She was not forthcoming about anything that I would consider controversial,” the publisher who met with her said. “We questioned her rigorously, but it was one-word answers. I considered it the worst, or the most frustrating, meeting of its sort that I’ve ever had.” He added, “But she really couldn’t have been nicer.” He said that his company would not be making an offer on the book, which was expected to sell for a couple of million dollars.

“I chose not to meet with her,” a publisher at another company said. “I got the impression that everyone was totally underwhelmed by her. That’s why there’s so little buzz.”

Ummm, talk about artistic license. This totally doesn't look like Pickles. For one thing, this woman's face looks intelligent, rather than good-naturedly Prozac'ed. For another thing, she looks quite a bit younger and thinner than the Pickles we know.

Plus - what is that view out the window? Is it the WTC on fire? Seriously, it looks like a towering sky scraper with smoke pouring from the upper floors. Am I right?

Didn't notice that. We're unable to pull ourself away from those eyes, which keep staring at us, & that Mona Lisa on gawd-knows-what smile.

The artiste's intent may have been a branch or something out the window, but you are correct, ma'am!

Indeed, there seems to be a second towering skyscaper (as we heard G. W. pronounce it on the radio recently) on the left side of the curved thing there. Maybe this is the view from her room at the Mayflower Hotel. We don't think there's a view like that from the White House. (As if we'd know.)