This Date in History - Dec. 22, by The Associated Press

by M. Bouffant     at 00:02
The Associated Press
Monday, December 22, 2008; 12:01 AM
Today is Monday, Dec. 22, the 357th day of 2008. There are nine days left in the year.
Today's Highlight in History:
In 1858, opera composer Giacomo Puccini was born in Lucca, Italy.
On this date:
In 1775, Esek Hopkins was appointed the commander-in-chief of the Continental Navy.
In 1808, Ludwig van Beethoven's Symphony No. 5 in C minor, Op. 67, and Symphony No. 6 in F major, Op. 68, also known as the "Pastoral Symphony," had their world premieres in Vienna, Austria.
In 1864, during the Civil War, Union Gen. William T. Sherman wrote a message to President Abraham Lincoln which said in part: "I beg to present you as a Christmas-gift the city of Savannah."
In 1894, French army officer Alfred Dreyfus was convicted of treason in a court-martial that triggered worldwide charges of anti-Semitism. (Dreyfus was eventually vindicated.)
In 1922, M. "Chas." Bouffant's immediate male ancestor was born.
In 1944, during the World War II Battle of the Bulge, U.S. Brigadier General Anthony C. McAuliffe rejected a German demand for surrender, writing "Nuts!" in his official reply.
In 1968, Julie Nixon married David Eisenhower in a private ceremony in New York.
In 1977, three dozen people were killed when a 250-foot-high grain elevator at the Continental Grain Company plant in Westwego, La., exploded.
In 1984, New York City resident Bernhard Goetz shot and wounded four youths on a Manhattan subway, claiming they were about to rob him.
In 1988, Brazilian environmentalist Chico Mendes was shot and killed. (A rancher, Darly Alves da Silva, was sentenced in 1990 to 19 years in jail for ordering Mendes slain.)
In 2001, Richard C. Reid, a passenger on an American Airlines flight from Paris to Miami, tried to ignite explosives in his shoes, but was subdued by flight attendants and other passengers. (Reid is serving a life sentence.)
Ten years ago: A Chinese dissident (Qin Yongmin) was sentenced to prison for trying to organize an opposition party. (Qin remains in prison.)
Five years ago: A magnitude 6.5 earthquake hit California's central coast, killing two people. A federal judge ruled the Pentagon couldn't enforce mandatory anthrax vaccinations for military personnel. Colombian rebels freed four Israelis and a Briton held hostage for 101 days.
One year ago: A jury in Riverhead, N.Y., convicted John White, a black man, of second-degree manslaughter in the shooting death of Daniel Cicciaro, a white teenager, during a confrontation outside White's house. (The 17-year-old was shot in the face after he showed up with two carloads of friends to confront White's son after a dispute at a party.)
Today's Birthdays: Former House Speaker Jim Wright is 86. ABC News correspondent Diane Sawyer is 63. Baseball Hall-of-Famer Steve Carlton is 64. Baseball All-Star Steve Garvey is 60. Golfer Jan Stephenson is 57.
Thought for Today: "Anger makes dull men witty, but it keeps them poor." — Attributed to Queen Elizabeth I of England (1533-1603). [Holy crap, how'd she figure us out? — Ed.]
From the World of Distraction on Today's Date:
In 1969, John Lennon and Yoko Ono met for an hour with Canada's prime minister. Earlier that day, they had met with Canada's minister of health to discuss drug abuse.
In 1973, Stephen Stills lost a paternity suit brought on by a Mill Valley, California, woman. The child had been born about two years earlier.
In 1976, singer Isaac Hayes declared bankruptcy.
In 1978, Kenney Jones became the drummer for The Who, replacing Keith Moon, who died four months earlier.
In 1979, the first of four "Concerts for the People of Kampuchea" was held in London. Performers included The Clash, Paul McCartney, The Pretenders and The Who.
In 1983, actors Parker Stevenson and Kirstie Alley got married. They have since split up.
In 1988, Morissey performed for the first time as a solo act in England.
In 1990, Pearl Jam performed for the first time together, under the name Mookie Blaylock, as the opening act for Alice In Chains in Seattle.
In 1995, actress Butterfly McQueen died of burns suffered when her house outside Augusta, Georgia, caught on fire. She was 84. She's probably best known for playing Prissy in "Gone With The Wind."
In 2000, Madonna married Guy Ritchie at a church in Scotland.
In 2002, singer-guitarist Joe Strummer of The Clash died of sudden cardiac arrest at his home in southwest England. He was 50.
Today's Show Biz Birthdays: Actress Barbara Billingsley is 93. Seen below trying to look sexy on the "Beaver" set, 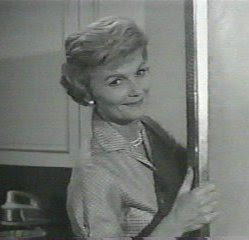 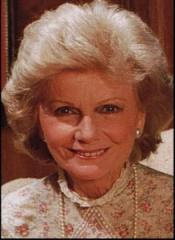 You ever go to the restaurant calling Billingsleys down on Pico in West LA? I understand that place is owned by someone in her family.

From the Cuisine Editor:

Never heard of it, even. Any good? Sounds like real meat/taters eatin', as opposed to someplace w/ an idiotic name & "Franco-Asian-Peruvian fusion" food.