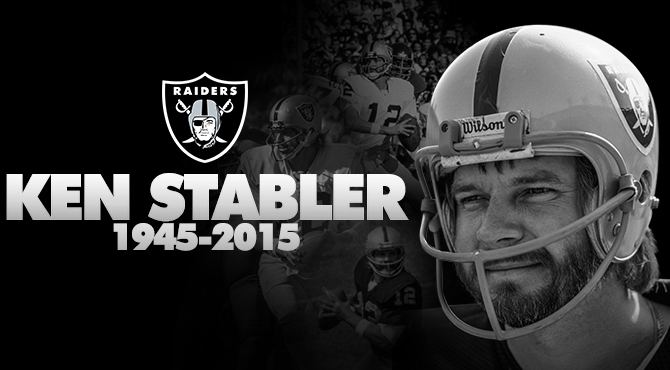 “The Raiders are deeply saddened by the passing of the great Ken Stabler,” said Owner Mark Davis. “He was a cherished member of the Raider family and personified what it means to be a Raider. He wore the Silver and Black with Pride and Poise and will continue to live in the hearts of Raider fans everywhere. Our sincerest thoughts and prayers go out to Kenny’s family.”

Statement from John Madden
“I was head coach of the Raiders the entire time Kenny was there and he led us to a whole bunch of victories including one in Super Bowl XI. I've often said, If I had one drive to win a game to this day, and I had a quarterback to pick, I would pick Kenny. Snake was a lot cooler than I was. He was a perfect quarterback and a perfect Raider. When you think about the Raiders you think about Ken Stabler.  Kenny loved life. It is a sad day for all Raiders.”

Family’s Statement on the Passing of Ken Stabler
We announce with great sadness that our father, Ken Stabler, passed away Wednesday, July 8 as a result of complications associated with colon cancer.

He passed peacefully surrounded by the people he loved most, including his three daughters and longtime partner, as some of his favorite songs played in the background, such as Lynyrd Skynyrd’s “Sweet Home Alabama” and Van Morrison’s “Leaves Falling Down.”

He quietly battled Stage 4 colon cancer since being diagnosed in February 2015.

He wanted to make a difference in the lives of others in both life and death. At his request, his brain and spinal cord were donated to Boston University’s Chronic Traumatic Encephalopathy Center to support research for degenerative brain disease in athletes.

He was a kind, generous and unselfish man, never turning down an autograph request or an opportunity to help someone in need. A great quarterback, he was an even greater father to his three girls and grandfather to his two “grand snakes.”

We are grateful for the tremendous love and support from friends and fans. We ask that you please respect our privacy during this difficult time as we grieve this heartbreaking loss.

He is survived by his three daughters Kendra Stabler Moyes (husband, Scott), Alexa (fiancé, Hunter Adams) and Marissa; His grandsons Jack And Justin Moyes; Sister Carolyn Bishop; Nephew Scott Bishop; and great nephew and niece Tayler and Payton Bishop. He is preceded in death by his father, Leroy Stabler, and mother, Sally Stabler.


Editor's note: Various news sources have been reporting that Kenny Stabler, a former Oakland Raiders and University of Alabama football player, has died. Those reports appear to be erroneous and stem from an inadvertently published story by The Tuscaloosa News, which has since published a retraction. - Jimmy

More from the Raiders.