by M. Bouffant     at 23:52
The U.S. Army is significantly more experienced w/ guns & stuff than many who profess to support the wholesale slaughter of babies & the like on the other side of the world/south of our own border by said military.

WASHINGTON — The Army has warned its recruiters to treat the gun-toting civilians gathering at centers across the country in the wake of the Chattanooga, Tenn., shooting as a security threat.

Soldiers should avoid anyone standing outside the recruiting centers attempting to offer protection and report them to local law enforcement and the command if they feel threatened, according to a U.S. Army Recruiting Command policy letter issued Monday.

As evidenced by our item directly below. Reactionary droolers, however, have a somewhat hysterical interpretation ... 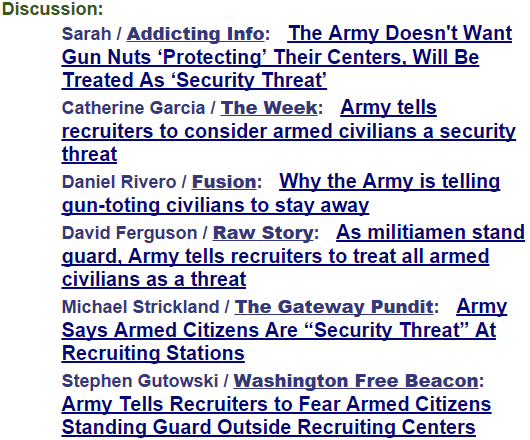 If the Armed Forces really don't want these patriots accidentally discharging their weapons at the malls, maybe they could pose & prance w/ their things in front of African-American churches that people might want to shoot up or light on fire.

Ha ha ha ha ha. I do crack myself up once in a while, when I hit an absurd note like that.