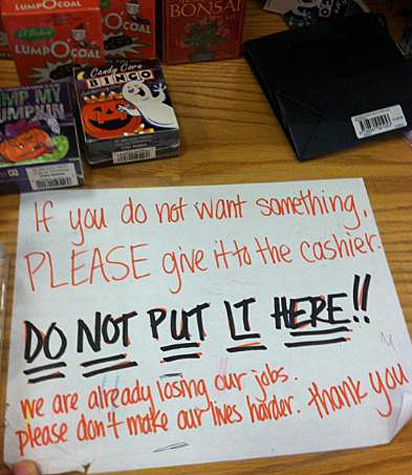 As the New York Times reported,


The troubles of Borders are rooted in a series of strategic missteps, executive turnover and a failure to understand the digital revolution — problems in many ways of Borders’ own making.

So it may surprise you to learn that Borders has the same belief as Wall Street with regards to rewarding incompetence. Rather than fix the problem, or punish those responsible, it punished its innocent employees, and the book-hungry public, by closing hundreds of stores. Meanwhile, the President and CEO is asking for $8.3 million in executive bonuses (including nearly $1.7 million for himself).

CEO Mike Edwards currently has a salary of $750,000. The bonus plan would give other top executives bonuses equal to as much as 90% to 150% of their base pay.

Borders is in debt to the tune of $1 billion, folks. As the Times reports,


In its filing in United States Bankruptcy Court in Manhattan, Borders listed $1.29 billion in debt and $1.27 billion in assets. As of the filing, Borders owed $272 million to its 30 largest unsecured creditors — including $41.1 million to the Penguin Group USA.

Employee raises have been frozen for years. Despite all this, last year the CEO got an 87 percent raise. Most Americans are lucky to see a 2 percent raise, if they’re not laid off altogether by the men giving themselves huge raises and bonuses.


For the last five years, Borders stock has drifted downward and the number of employees reduced to 19,500 from 35,000.

Does it seem to you the management of this company ought to be receiving rewards for running their business into the ground?

This seems more than a little immoral.

Yesterday, at a hearing in New York, a U.S. Bankruptcy Court Judge seemed to agree, ordering Borders to rethink its bonus plan for the company’s leading executives. Borders lawyer Bruce Buechler insisted that the bonuses were reasonable, saying that “we need management not just to be there, but to be cheerleaders or affirmative spokespeople for the company.”

Sounds like management should be fired. Most of us would be, if we exhibited this level of incompetence. Judge Martin Glenn responded that, “If this business goes down the toilet bowl, there are a lot of full or part-time employees who face the prospect of going out of work.”

Bloomberg reports that as a consequence,


Bruce Buechler, a lawyer for unsecured creditors, told U.S. Bankruptcy Judge Martin Glenn that the bonus plan was revised today so the five top executives, including Chief Executive Officer Mike Edwards and Chief Financial Officer Scott Henry, would be paid based on how much they recover for creditors under a sale or restructuring by Aug. 15.

The revised plan put forward by Buechler calls for the top five executives being given a maximum of $4.9 million “if they return more than $95 million to unsecured creditors.” This amount would drop to $1.8 billion if only $73 million is recovered.

But they should not receive any bonuses at all. Companies should not reward themselves and their management for actions that harm their employees. For what, precisely, are these bonuses due? What has management done for Borders outside of driving it into bankruptcy? I worked in retail management for more than a decade and have seen employees fired for much smaller infractions than this. Fired. Not rewarded.

Borders hired us in the previous millennium, so it should have been obvious for some time that the outfit was in big trouble.

Taxes should be oh-so-high on these leeches.

Trying Not to Giggle Editor:

Ah, the touchingly innocent Canadian. As if.

"We have charged them under the anti-terrorism act," Inspector Abdur Rahman of Darya Khan police told the BBC.

What, are there no laws against cannibalism?