Big Andy's Big Whinefest: Where Are The "Big Checks?"

by M. Bouffant     at 00:42
Forget that this is the man behind the Big Hollywood curtain, Andrew Breitbart; just consider that it should be captioned: "The Thinker." The brain wave radiation is almost palpable, isn't it? 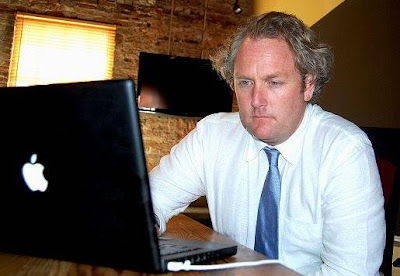 In the pages of Pig Hollywood, Big Andy Breitbart shows America half of what little he's got, then one must click to read more, sending us to The Washington Times, so he can get a click over there as well, & some sure income in these troubled times. That's right, the Washington "Moonie" Times, whose backer, Rev. Moon, is "the one" people should be screeching, raving & moaning about if they're scared  of someone considering himself the "messiah."Anyway, it's double+good schadenfreude for lefties, as A. B. admits that conservatives are nothing but Sad Sack squares who are so fucking nerdly & un-cool that they're a bunch of white guys & their missuses who are dying like geese in a jet engine.
His transparency is cute, though. Really, Andy's just a puppy who wants a treat. (And three squares a day for himself & the family, a house, a "nice" car, etc. Can you help? Older, wealthier guys hoping to meet "Hollywood" spokesmodels & actresses receive first priority.)

What the Republican Party needs to do now is figure out how to make up for 40 years of ignoring the net effect of film, television and music, and the youth culture that goes along with it. When will the people who make the big decisions and write the big checks realize the AM radio band is not enough?

We continue to be amused by the insistence of Andrew & others that all that's keeping Republicans a minority is branding. This is not a contest between two slightly differently flavored & sweetened blends of water & high fructose corn-syrup, or a pair of equally crummy American-made shit-mobiles. It's a war of ideas & thinky-stuff, not chrome fins & fizzy water. The difference between the two social-political-economic products is obvious, & no amount of trickeration will disguise the ideas for long. The right's biggest product line for the last 50+ yrs. isn't "ignorance of the net effect" of mass & youth culture, but the demonization of American culture (See: Hollywood, Big) the burning of books & records, the Junior Anti-Sex League, horror when white youth adopt black culture, and the general Puritan prudishness that attracts the repressed to Republicanism. Why do you think Republicans aren't considered "cool?" They're the party of the gawd-squad & "Get off my lawn, you little punks!"
Andrew, how can we take you seriously when you might as well be a marketing guy who's taken on Hansen's disease sufferers (Lepers, baby!) just for the challenge?
Can the eternally disapproving grouch be made "cool," other than in the most accidentally "Oh, hell, no, I'd never vote for him or her!!" ironic way? How any of that can be changed by "taking over" a Hollywood that is a collection of de-sensitized money-grubbers & egomaniacs is beyond us.
Perhaps, also, Breitbart's delusion that Hollywood is under the control of a mysterious cabal of rootless, cosmopolitan liberals explains his desire to run a wooden stake through Hollywood's heart.

We at Just Another Blog™ would have a great interest in seeing the minutes of any & all Democratic Party Central Committee or Politburo meetings where any such thing was discussed. Seriously. We may have to ask Mr. Breitbart a few questions: Where is the Democratic Party scholarship money that sent all the leftists to film school? For how long has ACORN been funding screen-writing workshops? What's the Teamsters' real interest in Hollywood?
So let the snark cease for but one moment, & also, perhaps, let us raise a glass to the brave Mr. Breitbart, & his Sisyphean task. You're a much, much, much more stubborn man than we are. Like a fucking mule, you're stubborn. Which is not good for a human being living w/ other human beings.
We wish you well securing those big wing-nut dollars for all your fantasy projects. Hell, if you're stubborn enough, you  should be able to get enough now shut up & go away development money to keep up the payments for a while. But you'll need more than mere stubbornness to get money for a political vanity project flowing in the current economic euphemism.