by M. Bouffant     at 23:22
Roman Catholic Pope Benedict XVI (né Hitleryouth) has decided to continue w/ the hating, by de-excommunicating four bishops who had their mitres handed to them, along w/ an invitation to get the hell out of the church, for having been consecrated some 20 yrs. ago by extra-right archbishop Marcel Lefebvre.


The Vatican said Saturday that Benedict rehabilitated the four as part of his efforts to bring Lefebvre's Society of St. Pius X back into the Vatican's fold.

But the move came just days after one of the four, British Bishop Richard Williamson, was shown in a Swedish state TV interview saying that historical evidence "is hugely against 6 million Jews having been deliberately gassed."

Christ on a crutch, so to speak. Have yet to watch this, but is it one of those "It was really only four and a half million, not six, so none of it counts" deals? As we watch: Oh no, it's much more than that! More on this dude, & political machinations w/in the church at the Times of London.
We find this sort of thing both stupid & very irksome. It really bothers other types. Jewish people, for example. And Andrew Sullivan:


I am truly, deeply ashamed of my church for this action and hope this provokes such an outcry it is reversed. These are not the words of Christ. They are the words of evil.

We don't pull this one out every time the German Pope does something, but he's begging for it this time. 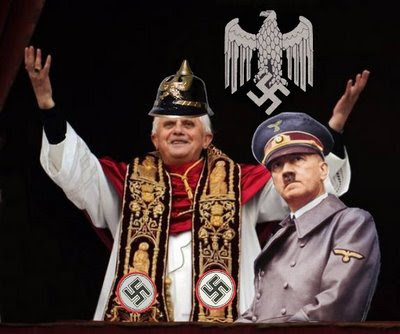