by M. Bouffant     at 20:47
Remember the American Thinker? A degenerate fringe element in its heyday, & the degeneration hasn't lessened any in the Age of Shit & Trump, as this paranoid headline indicates.

Insurrection is Here; How Long do We have Until Civil War 2.0 Starts?

These ominous uprisings are taking various forms but the most visible and aggressive ones involve Antifa-style “occupy” socialist and anarchist street mobs dedicated to taking down ICE – U.S. Immigration and Customs Enforcement, the federal government policing agency that is part of the Department of Homeland Security. The impetus for these actions has been the anti-President Trump Fake News psy-op meme that claims minor children of illegal immigrants arrested for crashing the U.S./Mexico border are being separated from their parents, sent to “Nazi”-like “concentration camps,” and systematically mistreated.

Far left groups whose rag tag appearance belies their sophisticated networking skills, including Direct Action Network and Democratic Socialists of America, are behind the actions. The Hill analyzed the radicals’ agendas after a group of DSA activists loudly confronted DHS Secretary Kirstjen Nielsen while she was having dinner at a restaurant in Washington, D.C.

I mean, listen to this idiot: 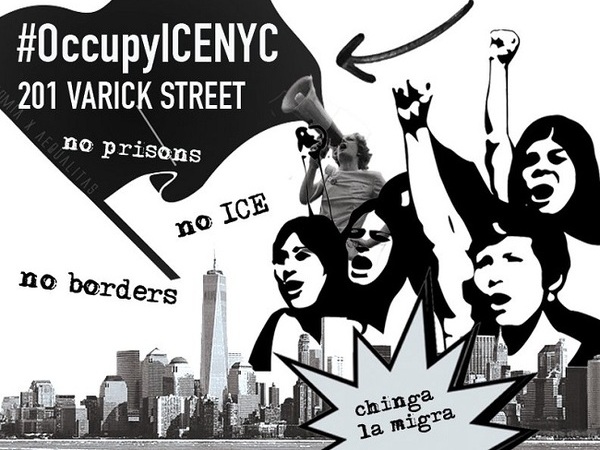 The shocking and obscene radical banner above about an ongoing occupy action in New York City is featured on the Portland Abolish I.C.E. PDX Twitter page. It calls for “no prisons no ICE no borders” and adds “chinga la migra” which translates as “f—k migra.” The word migra is a derogatory Spanish language slur for U.S. immigration officers often used by illegal immigrants.

Shocking & obscene!! "Derogatory", even! "Often used by illegal immigrants"! How dare they? Make room for me on the fainting couch while I clutch my pearls!

In recent years, law-breaking from the streets to the political suites no longer carries consequences for the preferred classes – Democrat politicians, high-level Deep State bureaucrats, professional leftist and anarchist agitators and their fellow travelers, and now illegal alien invaders.

Yeah, whatever. The Editorial Board here is guessing the American Thinkers are just a little teeny tiny bit scared as hell that Trump is bringing about a turning of the tables, & not in the direction that they'd hoped for. Remember who the "preferred classes" really are; neither "professional" leftist and anarchist agitators and their fellow travelers, nor "illegal alien invaders".

Whoa, as "As We Type" case in point,, speaking of the Democratic Socialists of America:

BuzzFeed:
A Young Progressive Woman Just Beat One Of The Most Powerful Democrats In Congress

Hank Berrien / Daily Wire:   SHOCK: Democrat Once Expected To Challenge Pelosi For Speakership Ousted By 28-Year-Old Socialist
Kay Steiger / Vox:   Is a high-ranking House Democrat about to lose his primary?

P.S.: Dig the typist's bio: Besides being a rank hypocrite & specialist in paranoid delusion, he's an alternative medicine pimp. Quelle surprise!*Album Title of the Wk.

Labels: Down W/ Science, Free Speech Isn't Free, Fuck You, Fucking Sheep, The Dialectic, The Militarized Society, The Urge to Kill, These Are Your Rights, WH16, When Do We Start Killing The Aristocrats?, WWIII