by M. Bouffant     at 17:25
It seems as if it were only yesterday ... oh, it was? How funny, then, that Jim Hoft, The Gateways Pundit, thought the DHS was full of it, in re: the potential for reactionary white people (Could one even be whiter than a Norgie?) to commit acts of terror.

So, was today's terror in Oslo all Muslim & al-Qaeda? Nope, looks as if Anders Behring Breivik is a Mason. 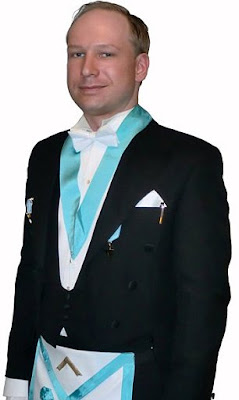 Granted, we found this shot of the Masonic (alleged) Murderer at Limeyland's MailOnline, which isn't much more credible than Genius Jim.

Even gets to an old wretched cynic like ourself.