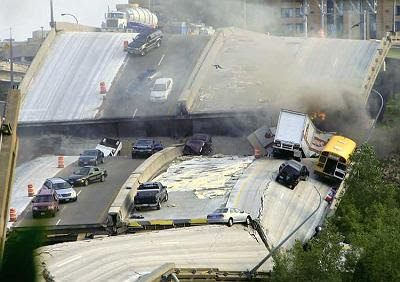 
In March 2001, the American Society of Civil Engineers (ASCE) issued a “Report Card for America's Infrastructure,” grading 12 infrastructure categories at a disappointing D+ overall, and estimating the need for a $1.3 trillion investment to bring conditions to acceptable levels. In September 2003, ASCE released a Progress Report that examined trends and assessed the progress and decline of the nation’s infrastructure. The Progress Report, prepared by a panel of 20 eminent civil engineers with expertise in a range of practice specialties, examined 12 major categories of infrastructure. The report concluded: “The condition of our nation's roads, bridges, drinking water systems and other public works have shown little improvement since they were graded an overall D+ in 2001, with some areas sliding toward failing grade.”*

And why shouldn't it, as the infrastructural meltdown is the result of a political structure that allows suburban scumbags to vote down taxes, bonds, appropriations or anything else that might contribute to the common good, and politicians (what an interesting coincidence this bill was introduced today) unable to convince said suburban scumbags to contribute to the common good.(While allowing President Bush to piss away what will soon amount to a trillion dollars US in the socio-politico-religio-econo-military quagmire that is Iraq.)


*American Society of Civil Engineers, “What can happen if America fails to invest in its infrastructure? Anything,” news release (4 September 2003).

Suburban scumbags, they don't care/ They just get fat and dye their hair. Hey, I just almost spelled "dye" "die". Fucking spell checkers are making me illiterate. That and my medication-impaired typing.
P.