The Prince's PR Luncheon In Washington 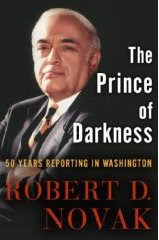 A guy edited by a guy w/ an ugly caricature (Is it trying to grow itself a 'stache?) goes to a lunch w/ the life model for Simon Bar-Sinister, who pimps his book and decries the media (don't we all?):

[N]o one covers the day-to-day happenings on the floor of the House and Senate.

Except C-SPANs 1 & 2. What truly happens on the floors of the Congress anyway? Isn't all the action in the committees & cloakrooms, if not on fabled "K" Street?But enough, let's get to the election predictions, fantasies, etc.

Now that Giuliani, Romney, and Thompson form the Republican top tier, Novak was reluctant to make a prediction--but he did say that if he was forced to bet, he'd bet on Thompson.

[W]hile some Republicans seem convinced that the party needs another electoral beating to come back stronger after 2008, "things don't always work that way." He expressed tremendous concern about the possible expansion of government under a second President Clinton, working with Democratic majorities in Congress.

And who would he like to see as president? He expressed a fondness for Ron Paul.
"Can you imagine what he'd do about the UN?"

I don't need to IMAGINE, I KNOW the UN is the product of elitist idyllic speculation. Look at the EU. Even the EU doesn't want it. Look at NAU, Canada and the US don't want it.

Golly and gosh! Ya know, you can tell yourself that I don't understand Tesla, but I do. A century of cover up - the results are of negligible import. That's what the premise of fraud gets ya - NOTHING.

Sucks to be you.

From The Editor:
Every time Just Another Blog™ mentions Ron Paul, one libertarian or another w/ mad Google™ skillz sniffs it out & leaves one of these "Golly, why don't you get it?" messages.
This one is a bit odder than usual. Mr. Wyatt may have confused a desire in these parts for NO World Order w/ the "New World Order" of which many speak, though few have the slightest idea of what it may be beyond a remark by the one-time President George H. W. Bush. (Whose grandfather was, of course, instrumental in the whole Tesla cover-up.)
Keep watching the skies!
(Black helicopters are everywhere.)