by M. Bouffant     at 00:01
Today is Saturday, Oct. 17, the 290th day of 2009. There are 75 days left in the year. The UPI Almanac. Today's Highlight in History:
On Oct. 17, 1989, an earthquake measuring magnitude 7.1 struck northern California, killing 63 people and causing $6 billion worth of damage. (The quake hit just before Game 3 of the World Series between the Oakland Athletics and San Francisco Giants at Candlestick Park; the Series was suspended until Oct. 27, at which time the A's resumed their four-game sweep of the Giants.)
On this date:
In 1777, British forces under Gen. John Burgoyne surrendered to American troops in Saratoga, N.Y., in a turning point of the Revolutionary War.
In 1807, Britain declared it would continue to reclaim British-born sailors from American ships and ports regardless of whether they held U.S. citizenship.
In 1907, Guglielmo Marconi began offering limited commercial wireless telegraph service between Nova Scotia and Ireland.
In 1919, Radio Corporation of America was chartered.
In 1931, mobster Al Capone was convicted of income tax evasion. (Sentenced to 11 years in prison, Capone was released in 1939.)
In 1933, Albert Einstein arrived in the United States as a refugee from Nazi Germany.
In 1941, the U.S. destroyer Kearny was torpedoed by a German submarine off the coast of Iceland; 11 people died.
In 1945, Col. Juan Peron staged a coup, becoming absolute ruler of Argentina.
In 1957, French author Albert Camus was awarded the Nobel Prize in literature. 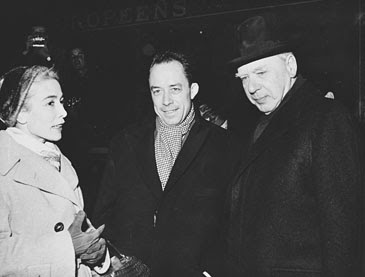 In 1973, Arab oil-producing nations announced they would begin cutting back oil exports to Western nations and Japan; the result was a total embargo that lasted until March 1974.
In 1978, President Jimmy Carter signed a bill restoring U.S. citizenship to Confederate President Jefferson Davis. {Fuck, he is the worst President ever! — Ed.]
Thirty years ago, in 1979, Mother Teresa of India was awarded the Nobel Peace Prize. [Fucking evil Albanian Dwarf. — Ed.]
In 1987, First lady Nancy Reagan underwent a modified radical mastectomy at Bethesda Naval Hospital in Maryland.
In 1997, the remains of revolutionary Ernesto "Che" Guevara were laid to rest in his adopted Cuba, 30 years after his execution in Bolivia.
In 1999, the FBI reported that serious crimes reported to police declined for seventh straight year in 1998 and murder and robbery rates reached 30-year lows. Former nurse Orville Lynn Majors was convicted of murdering six patients at a western Indiana hospital; the jury deadlocked on a seventh count. (Majors is serving a 360-year prison sentence.)
In 2004, the Iraqi militant group of terror mastermind Abu Musab al-Zarqawi declared its allegiance to Osama bin Laden. Betty Hill, who claimed that she and her husband, Barney, had been abducted, examined and released by extraterrestrials in 1961, died in Portsmouth, N.H., at age 85.
In 2007, President Bush, raising Beijing's ire, presented the Dalai Lama with the Congressional Gold Medal and urged Chinese leaders to welcome the monk to Beijing.
In 2008, Wall Street ended a tumultuous week that turned out to be its best in five years. The Dow Jones industrial average lost 127 points, closing at 8,852.22, but turned in the strong week because of two huge days of gains — a record 936-point jump the previous Monday and an increase of 401 points on Thursday.
Today's Birthdays: Actress Marsha Hunt is 92. Actress Julie Adams is 83. Newspaper columnist Jimmy Breslin is 79. Country singer Earl Thomas Conley is 68. Singer Jim Seals (Seals & Crofts) is 67. Singer Gary Puckett is 67. Rock musician Michael Hossack is 63. Actor Michael McKean is 62. Actress Margot Kidder is 61. Actor George Wendt is 61. Actor-singer Bill Hudson is 60. Astronaut Mae Jemison is 53. Country singer Alan Jackson is 51. Movie critic Richard Roeper is 50. Movie director Rob Marshall is 49. Actor Grant Shaud is 49. Animator Mike Judge is 47. Rock singer-musician Fred LeBlanc (Cowboy Mouth) is 46. Actor-comedian Norm Macdonald is 46. Singer Rene' Dif is 42. Reggae singer Ziggy Marley is 41. Golfer Ernie Els is 40. Singer Chris Kirkpatrick ('N Sync) is 38. Rapper Eminem is 37. Singer Wyclef Jean is 37. Actress Sharon Leal is 37. Actor Matthew Macfadyen is 35.
Today In Entertainment History October 17
In 1915, playwright Arthur Miller was born in New York City.
Seventy years ago, in 1939, Frank Capra's comedy-drama "Mr. Smith Goes to Washington," starring James Stewart as an idealistic junior U.S. senator, had its premiere in the nation's capital.
In 1960, Dion and the Belmonts broke up.
In 1966, "Hollywood Squares" premiered on NBC.
In 1967, the musical "Hair" made its premiere off-Broadway.
In 1968, Jose Feliciano released his controversial rendition of the national anthem. He had originally performed it before a 1968 World Series game and was booed.
Forty years ago, in 1969, the American Federation of Musicians allowed The Kinks to tour the US It had banned the Kinks from playing in the US after the band appeared without permission on "Hullabaloo" in 1966.
In 1978, Frankie Valli hit number one with the title song from the movie "Grease."
Thirty years ago, in 1979, Fleetwood Mac's double album "Tusk" was released. It took two years to record and cost more than $1 million to produce. The album was only moderately successful when it came to sales.
In 1990, the country mother-daughter act, The Judds, announced they would no longer perform together because Naomi, the mother, had chronic hepatitis. Wynonna continued on as a solo act.
In 1991, singer Tennessee Ernie Ford died in Reston, Va., at the age of 72. He's probably best known for taking "Sixteen Tons" to the top of the pop and country charts in 1955.
In 2008, Four Tops frontman Levi Stubbs died in Detroit at age 72.
Thought for Today: "To talk to a child, to fascinate him, is much more difficult than to win an electoral victory. But it is also more rewarding." — Colette, French author (1873-1954).