Do Not Piss Peacefully In Our Ears & Tell Us It's Raining

by M. Bouffant     at 16:21
At last, relief from the drought, courtesy of the perpetually juvenile Victoria Jackson, 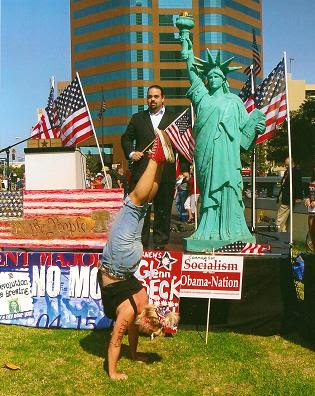 The truth has a beautiful ring to it.  It pours smoothly through the ears and forms a golden, peaceful puddle in the heart.  It reassures one that there is still a drop of good in the world.  Truth is Beautiful.

As long as there's a single drop of golden, peaceful, good in the world, we can all rest easier.

Ms. Jackson's breathless, juvenile typing style makes her a shoo-in for the "Oldest Valley Girl" crown. Possibly "Harmless But Still Creepy Stalker of The Year," too.

If one day, Glenn Beck, you become embroiled in a scandal, and you turn out to be imperfect as all heroes put up on pedestals turn out to be, I will forgive you and forever be grateful for one thing…the elegant way you introduced the Green Jobs Czar, Mr. Van Jones to the public and then ushered him silently out the door.  That was awesome! ( It also helps me prove the fact that Obama is a Communist.  A Capitalist would not appoint a Communist as an advisor! )  It was as exciting as watching Giles/O’Keefe/Breitbart bring down the corrupt Acorn.


And at least a nomination for "Most Fantasy-Deluded Columnist." "Bring down the corrupt Acorn?" Missed that.

One more before our post-breakfast nap. Conservatives, as we all know because they are so eager to remind us, see nothing but the content of people's character, NOT THE COLOR OF THEIR SKIN!! What, then, should we make of Victoria's ability to ferret out "real names" & possibly illegal aliens.

Sigh.  I look at my Vietnamese manicurist and pedicurist and smile.  I ask them their names.  Katie.  Kathy.  Hmm.  I glance around the nail salon.  The decor is Greek columns with 1920’s lamps in between. There is a 1970’s Disco Bar in the middle of the room with a 1930’s Art Deco Chandelier in the center.  There is a Faux Greek Mural and then Post Modern New Age Sterile Minimalist Lights sprinkled in between.  It’s “Psychedelic International.”  Just like the New America.  I ask Katie and Kathy what their real names are.  They look at me suspiciously. Hang and Gnoc.  Okay.

I took my beautiful fake nails out to my car and drove to the car wash. Hard working, friendly Mexicans made it shiny. I don’t know if they were legal or illegal. I love everyone, but I think rules should be followed. Why can’t they be legal? Is it difficult? You’ll probably explain Amnesty to me tomorrow on TV, because you always know what I’m thinking. I did those minimum wage jobs for years, working my way up the Capitalist ladder. I did it with a happy heart looking forward to the day when I could have a great job! But, while Obama romances the racial minorities; defending Professor Gates, picking Sotomayor, having Latin dance parties, and hinting at Amnesty, don’t the minorities realize that if Obama continues to destroy Capitalism they will always be stuck on the bottom rung? There will be no Capitalist ladder.