by M. Bouffant     at 16:47
If you believe that headline you're as much of a sucker as the typical Breitbart employee, yet another of whom fell for something satirical. (See: "Friends of Hamas.") What's left of the story, as it appeared on Breitbart.com mins. ago:

And here is the retraction & apology found if the link is clicked: 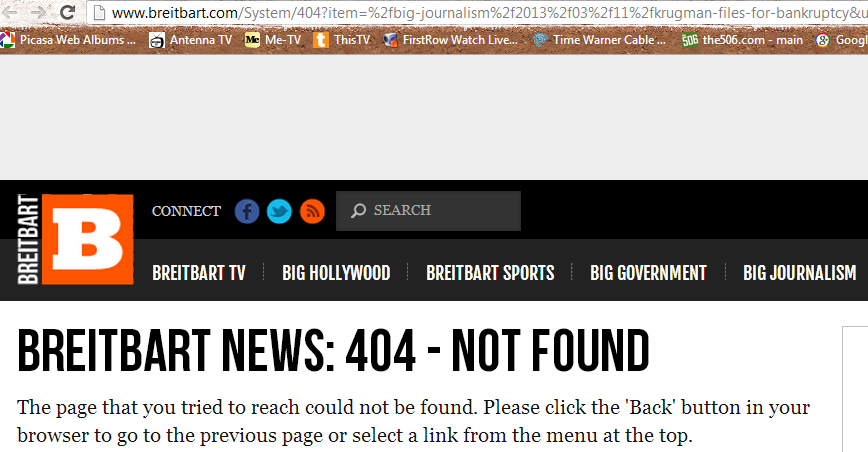 How in hell will these idjits take over American pop culture (financed, of course, by wealthy suckers to whom the Breitbarts & other culture warriors continuously suck up) when they can't recognize satire, lampoonery, spoofing or parody? (½ Hour News Hour, anyone?)

Oh, not just culture, sports too, per one-time half-term Gov. & bitter clinger Sarah Palin, here slurped all over by one Tony Lee of Breitbart. No longer-Gov. Palin apparently influences sports by making a big deal of athletes so insecure & pathetic they must wear Gawd on their sleeves. This, somehow, will make Americans ... well, it'll make them do something. Asian-Americans polled during the height of Linsanity thought Sarah was swell when she bought a Lin jersey; it must be working, except for actual votes.

Palin has always been fluent in popular culture and sports.

Last season, when Jeremy Lin, an Evangelical American-born basketball player of Asian descent, took the NBA--and nation--by storm in what was dubbed "Linsanity," Palin went to New York and bought his Knicks jersey. She praised him as an "all-American" and meritocratic success story to various outlets. Her words cut through the culture and reached Asian-Americans who do not pay attention to politics, who commented favorably about Palin during the height of Linsanity. Lin's success was culturally to Americans of Asian descent what Fernando Valenzuela's emergence with the Los Angeles Dodgers in the 1980s ("Fernandomania") was to Americans of Mexican descent.

President Barack Obama, another person, for all his faults, who gets the importance of culture, also praised Lin on Air Force One last year. But Republican politicians not named Palin were too busy poll-testing whether commenting on Lin would benefit them.

It is worth noting that in 2012 presidential election, a greater percentage of Asian-Americans somehow voted for Obama than Hispanics. Much of that represented a failure on behalf of the careful, timid, and cautious Republican establishment who neither get nor know how to cut through the culture like Palin has so successfully done since she became the 2008 Republican vice presidential nominee.

Palin was also ahead of the curve in praising Tim Tebow when he was with the Denver Broncos and, most recently, was watching the Daytona 500 and publicly tweeting her support for Danica Patrick during the final laps of the race. Patrick became the first woman to win a pole at a NASCAR race and one of the few drivers, along with legends like A.J. Foyt and Tony Stewart, to ever to lead laps in the both the Indianapolis 500 and the Daytona 500, racing's two signature events.

As an athlete who runs a faster marathon--after having had four children (Palin ran the marathon before she had her fifth child)--than male Republican jocks like Paul Ryan and someone who has been a sportscaster, Palin--perhaps more than any other Republican politician--has always gotten the importance of sports in shaping the broader culture.

Non-sporting types should be aware that as soon as these Jesus freaks stop performing well (Has their gawd forsaken them?) no one gives a shit about them. (See: Tebow, Tim & Lin, Jeremy.) And we mention to Sports Culture Warrior & Breitbartian typist Tony Lee that one doesn't win "a" pole at a NASCAR race. Drivers earn the pole. Getting a pole at Daytona is something else entirely, probably from Deliverance.
*Satire, or a lampoon, or a parody, maybe ironic or even sarcastic. Will not be looking each word up to get an exact & definitive definition.

It's all Boston.com's fault.

Publisher:
Yeah, you don't see any outside stock quote widgets at this reputable operation.

Well, not any more.

The Slog, FTW! (And make sure to follow their link.)

But you get big ups for getting me to Google in the first place.

It could not get better than any of that, so now I'm going off for an eight or so hour nap.

Current Editor:
Googling or maybe three clicks would have revealed the reality, & saved embarrassment. Except the ghost-worshippers aren't familiar w/ embarrassment or shame.

That hashtag makes me laugh every time I see it. I can only picture Erickson Erickson amongst his rearranged couch cushions, a case of Cheetos behind him (MREs), with a saucepan on his head, making machine gun noises with his mouth.

ROFL @ Weird Dave's link! I had not heard that the WaPo actually believed AND (re)REPORTED that Sarah Palin had joined Al Jazeera.

Splain to me again why we're supposed to care about the death of newspapers?

Okay, I don't really mean that, but cheese and rice, you gotta wonder how many of the mortal wounds are self-inflicted.