The worker explained that without the census the government would not be able to correctly allocate its funds to the various states. Of course, the government has no funds, but only that which it violently appropriates from the population, and I explained that such violent redistribution of private property was entirely immoral.

Like the first worker who visited my house, the second was confused about the aggressive nature of the state. I explained to her that, as Ludwig von Mises observed, all government action ultimately resorts to the use or threat of aggression.

Not funny, really, in that the collective, you all-included we have been hearing about their peculiar, extra-stunted "morality" for yrs. (& yrs. & yrs. & yrs. & yrs.) from these inane drones.

The violence involved in transactions w/ the IRS, dear moralist, is only if you choose to be violent in resisting a  prison sentence for tax evasion. A prison sentence that will not be imposed by fiat, by the way, but by a judge & jury, after a trial, appeals & so on.

We also note that we haven't filed since 1995. We figure '95 because we recently found our never-filed '96 forms in a box while looking for awful video tape. 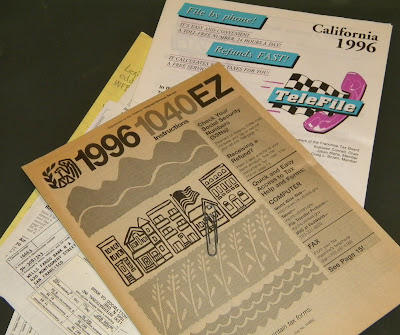 Yet not one jack-booted IRS thug has come knocking w/ a battering ram. Not a one, Mr. Violence-Inherent-in-the-System.

NB: Were it not for our incontrovertible evidence, we wouldn't have wasted nearly an hr. of whats left of our life dealing w/ this cretin's tiresome diatribe. Fucking asshole.

I suspect he would have no problem with certain acts of aggression against certain oil-rich nations in the Middle East. National security, and all that.

I gotta get on that. I am owed.

Not To Cast Aspersions Editor Casts:

Vijay Boyapati, a former Google engineer who famously (relatively speaking) quit his job to work for Rep. Ron Paul's 2008 presidential campaign, posts an essay at Paul's Campaign for Liberty website making the case for not complying with the Census.

*Used to know someone whose rationale for gassing & dashing all across the U.S.A. was "They owe me!"

The rationale (I am just guessing here) is that there may well be a constitutional obligation for the US to regularly hold a census, but HA HA there is nothing there in writing obliging individual citizens to respond to it.

I think I would have started laughing at this idjit, had I knocked on his door.

I think most of the non-respondents in my area were concerned that I was with INS.

We await Mr. The Bastard's advsing us if the next phase of the census is waterboarding of non-respondents, or if they go straight to violent coercion.

Mr. Boyapati is subject to a $5,000 fine if he doesn't cough up. We'd love to see him whipping out his debit card at the Courthouse.