by M. Bouffant     at 13:29
Maybe it's the humidity, maybe it's common sense, but we just aren't giving a shit about the situations that humanoids have made in their world of suffering, misery & you name it. So let's go local. It is humid. Yesterday afternoon it rained in the eastern parts of Santa Monica, enough to make some drivers turn their windshield wipers on, not quite enough to cause the usual spate of traffic accidents that occur when the rain hits the oily sts. What the fuck is this, Noo Yuck City, w/ the sudden summer rainstorms? Later, there was a display of lightning flashes that gave us a bit of a fright, but only because we thought at first it was the blue-tinged spotlight of the General Services Dep't.'s Public Safety Po-leese come to roust us. Then we were worried that an actual lightning strike might hit the metal pole sticking into the sky that our head rests mere cms. from. Then we went to sleep. The Black Moses had been scheduled to make the musical scene at the annual Sunset Junction Street Festival later this mo., until he exercised himself to death. Now Sam of Sam & Dave fame will be appearing "in a tribute to Isaac Hayes."
Below: Bogus Lorna Doom (Bijou Phillips, daughter of "Mama" Michelle Phillips & "Papa" John Phillips) & Pseudo-Darby. Photo: Kevin Estrada

Also advertised at the function at the junction: The Germs. Well, it's not The Germs. Even if Lorna, Don & Pat are playing, they're probably playing too well thirty yrs. later, & sans Darby (neé Bobby Pyn) Crash it just isn't. In one of those "meta"-things, the rôle of Darby is being played by Shane West, who plays Darby in the biopic What We Do Is Secret, which seems to have taken a yr. to reach theatres. Listen to the imitation here; also other multimedia crap & the story of the delay of the making of the flick. Per the NYT review:

Despite this — and a particularly ugly dental prosthesis — Mr. West succeeds in conveying the intelligence behind the desperation, exposing an intellect wholly focused on premeditated extinction.

As opposed to the random extinction that all others will suffer? Or does a certain NYT film reviewer think everyone else lives forever? The prosthesis? He had some ugly teeth. No Hollywood implant job for our boy. Big question: Will "Mr." West (to cop that NYT style) be wearing said ugly prosthesis onstage?
Below: Authentic Darby Crash @ The Masque, 23 November 1977. Photo: Unknown 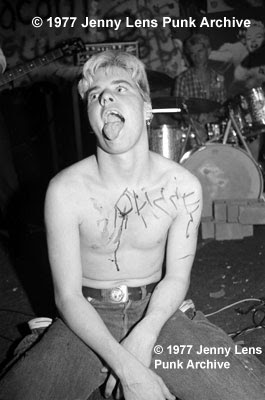 Anyway, don't be fooled. No Black Moses, no Darby from the grave. It will cost you $15.00 in advance. $20.00 @ the gate, however. Per day. No longer on a donation basis, either. In the world of local homelessness, The People's Republic of Santa Monica (also known to Harry Shearer as the Official Home of The Homeless) is once again behind the actual trends, as they attempt to clamp down on free expression & those who are uhhoused, even as the rest of the nation turns away from Bush & his "screw everybody else" ilk.

"The key issue is that the city needs to be open to the public," said Kathleen Rawson, executive director of the Bayside District Corp., the public-private partnership that manages the downtown business district and urged the council to consider the restriction.

The city must be open. Mr. Mayor, tear down those walls!

When the city installed the slatted metal and wooden chairs and benches, Rawson said, they were not intended for use by people trying to make a living.

The ordinance is aimed at opening resting spots that are often monopolized for hours at a time by panhandlers, many of whom are homeless. The city already prohibits the promenade's street performers from sitting on public chairs or benches. Thousands of visitors and residents compete daily for about 100 seats.

Oh yes, the competition is incredible. Not a day goes by w/o a knife fight, & there are wkly. gun battles over those 100 seats. (Those are merely the Japanese tourists visitors.) Not to mention all the bicycle-by slashings of yoga mats. (Santa Monicans play for keeps.)

Apparently the idea of adding benches & seats is too large a concept to enter the pinheads of the "public-private partnership." Another indication of Santa Monica being behind the trend. What's happened w/ those other "privatization" projects our federal gov't.'s been behind? Going well?

One recent lunchtime, little panhandling could be observed on and near the Third Street Promenade. One grubby fellow sat in a public chair, asking for nothing. Chairs and benches were occupied mostly by visitors from out of town.

That's on-line in the Incredible Shrinking Newspaper™©. In the print version, it says:

One recent lunchtime, little panhandling could be observed on and near the Third Street Promenade. One grubby fellow sat in a public chair, inexplicably holding a chain in one hand but asking for nothing. Chairs and benches were occupied mostly by visitors from out of town – New York, Toronto, Germany.

We mention this mostly because we've seen the guy w/ the chain, who's been identified to us as "Skippy," & uses his chains, as well as a collection of pipes, as percussion instruments accompanying unlicensed, uncertified street performers, who apparently will be shot if they strum two consecutive chords w/o gov't. papers in the outdoor temple of commodity fetishism that is the Third Street Promenade. Skippy is one grubby mofo, however, & he emphasizes it by a tendency not to sport a shirt.

We are curious as to the editing decision to delete the chain part. Just one of the many mysteries at the Incredible Shrinking Newspaper™©.