Stabs From The Past

1958: Then Vice-President Richard "Tricky Dick" Nixon was shoved, stoned, booed & spat upon by anti-American protesters in Lima, Peru. Below, we see the car The Nix used in Caracas, Venezuela, where anti-American sentiment also ran high on his South American tour. 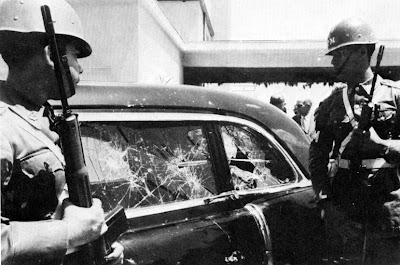 1978: David R. Berkowitz pleaded guilty in a Brooklyn courtroom to murder, attempted murder, and assault in connection w/ one of the "Son of Sam" shootings that had terrified New Yorkers.