by M. Bouffant     at 14:18
Johnny Boy is speaking w/ the proverbial forked tongue again. ("Surprise, surprise!") If you want to be picky, he qualifies his lying w/ the weasel phrase "Never, to my knowledge."

McCain, who has sponsored a plan to reduce greenhouse gas emissions, said his rivals had "never, to my knowledge, been involved in legislation nor hearings nor engagement in this issue," even though both Obama and Hillary Rodham Clinton co-sponsored his global warming legislation in 2007 and now back more aggressive measures.

Next it'll be "I don't recall..." Alberto Gonzales style. Remember Al? Where is he today? Back to his old gig shystering for Texas real estate developers? Making big bucks on the Republican rubber chicken circuit? Waterboarding detainees in his spare time?

Back on the McCain front, morbidly obese evangelical endorser John Hagee has issued a non-apology apology for his anti-Catholic rants. Y'know, where you don't actually apologize, or admit that you were wrong, but merely state that you're sorry if anyone found your "remarks" hurtful or were offended by them. 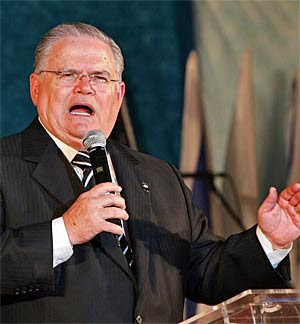 The other fat slob involved in this is William Donohue, who runs a fund-raising scam called the Catholic League, wherein he scares Catholic sheep, by appearing on television & ranting against gay people, then bitches & moans when anyone says anything bad about Catholics or Pope HitlerYouth or whatever the hell, to insure that the faithful will send him more money to defend the Holy Mother Church against the homos or whoever he says is threatening it this wk. If memory serves, he's the one who said "Jews" in Hollywood would poke their grandmothers in the poopchute on film if it would make them a buck. Or was that a different weasel-dick? We haven't time to look it up. Anyway, Big Bill made a big stink about Hagee's blather, about which Hagee now says:

the terms he used to describe the church, such as "the great whore," were "rhetorical devices long employed in anti-Catholic literature."

No shit, Sherlock. When did you figure that out, when you were busily reading all the anti-Catholic literature you could get your meat hooks on? We thought most of that "whore of Babylon" stuff came from the Book of Revelations, found in some versions of the Holy Bible. Is that all rhetorical devices now, rather than the "revealed" or "inspired" or something word of gawd?

All is well now, in the battle to impose religion by force.

"Pastor John Hagee has demonstrated an improved understanding of the Catholic Church and its history," Catholic League President Bill Donohue said in a statement. "The tone of Hagee's letter is sincere. He wants reconciliation and he has achieved it."

McCain said he was pleased by the exchange. "That's the kind of reconciliation that I've been engaged in for many, many years," he said.

Asked whether he or his campaign was involved in brokering the reconciliation, McCain said: "I certainly wasn't."

Hey Johnny, you were asked if your campaign was involved, not if you were. That would be a non-denial denial, like the non-apology apology.