Today In "You Can't Make This Up" 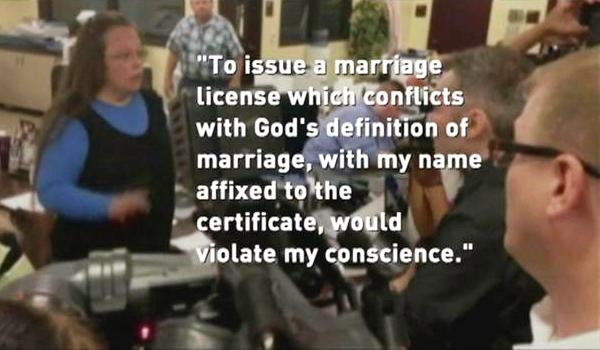 Hypocritical ho-bag of the day:

The Kentucky county clerk facing potentially stiff penalties for refusing to issue same-sex marriage licenses has been married four times, raising questions of hypocrisy and selective application of the Bible to her life.

The marriages are documented in court records obtained by U.S. News, which show that Rowan County Clerk Kim Davis divorced three times, first in 1994, then 2006 and again in 2008.

She gave birth to twins five months after divorcing her first husband. They were fathered by her third  husband but adopted by her second. Davis worked at the clerk's office at the time of each divorce and  has since remarried.


Davis has described her desire to strictly adhere to the Bible in stark terms and thus far has shown no sign of bending to court orders on same-sex marriage. She said Tuesday she fears going to hell for violating "a central teaching" of the Bible if she complies with the orders.

Davis' struggle to exempt herself from the Supreme Court's June decision legalizing same-sex marriage has excited some Christian conservatives but legally has proven futile: The Supreme Court refused her request Monday that the justices intervene, and a federal judge will decide Thursday whether to hold her in contempt.

Davis’ divorce records, in the meantime, are a “popular file” at the local courthouse, a woman who answered the phone tells U.S. News, as bloggers and social media users titter with accusations of hypocrisy.

Davis did not respond to an emailed request for comment, and her office’s phone line was busy throughout the day Tuesday.

The leader of the organization providing her legal representation, Mat Staver of Liberty Counsel, says he’s not sure precisely how many husbands Davis has had, but that it's not relevant.

“I know she was married more than once – I’ve heard three [times],” he says. “It’s a matter of fact that she’s been married multiple times.”

Staver says “it’s not really relevant, it’s something that happened in her past” and that her conversion to Christianity about four years ago wiped her slate clean*. “It’s something that’s not relevant to the issue at hand,” he says. “She was 180 degrees changed.”

In a Tuesday statement released by Liberty Counsel, Davis admitted she had lived an imperfect life, but insisted her current beliefs are sincere.

“It is not a light issue for me,” she said. “It is a heaven or hell decision.”

Three other Kentucky county clerks have expressed opposition to facilitating same-sex marriages, and one of them says Davis’ divorces in no way diminish her credibility.

Casey County Clerk Casey Davis, who is not related to Kim Davis, tells U.S. News he believes there’s a difference between getting a divorce and then repenting and living in a same-sex relationship.

“I don’t have any problem with that whatever, how she was before. If the Lord can forgive her, surely I can,” he says. “That’s something that’s forgivable just like any other sin, but if you continue in it and live in it, there’s a grave danger in that.”

Casey Davis says he wasn’t personally aware Kim Davis had been divorced and that he has no desire to speak with her about that. “You know this, people will say everything and all this stuff, they want to bring the worst out in the best of people. Obviously it’s human nature. I don’t like it and no one should,” he says.

*N.B., suckahs: Not an actual legal doctrine, will be laughed out of court.

Labels: Denial River, Fuck You, Gawd, Gawd Gays and Guns, Religiosity, Republicans, Schadenfreude, The Dialectic, The Urge to Kill, These Are Your Rights, White Un-American Activities

My friend and co-worker has been with the same guy for thirty-seven years, and crazy Kimmie would have denied him a marriage license.

she fears going to hell for violating "a central teaching" of the Bible if she complies with the orders.

I can see that "resigning", though it seems a simple solution for us outsiders, is not really an option. The position of County Clerk is evidently a dynastic one, like Guardian of the Graal -- she inherited it from her mother, she must retain it and pass it on to her son IN ACCORDANCE WITH THE PROPHECY.

Too Lazy To Embed Ed.:
You may be joshing, but her son does work at the clerk's office.
All but one of the deputies — Nathan Davis, Kim Davis' son — said they would obey the judge, some more reluctantly than others.

"I'm a preacher's daughter," deputy clerk Melissa Thompson told the judge, crying. "This is the hardest thing I've ever had to do in my life."

Bunning said he would not hold the younger Davis in contempt since the rest of his colleagues were willing to obey the law. Read more here: http://www.kentucky.com/2015/09/03/4018514/federal-judge-jails-rowan-county.html#storylink=cpy

And marriage will ROON your colleague's relationship!