SAT 7 FEB 1942
General
President signs Executive Order 9054 establishing War Shipping Administration (WSA) to bring the control and operation of all U.S. merchant shipping under a single head. The WSA's most pressing task is to mobilize the shipping capacity of the country (the majority of which is still in private hands by the end of the year 1941) to bring it under single control so that vessels can be allocated more readily on the basis of overall shipping needs of the U.S. and the Allies (see 9 February).

Yacht Isabel (PY-10) rescues all 187 survivors from Dutch freighter Van Cloon, which had been torpedoed and shelled earlier that day by Japanese submarine I-155 and beached in a sinking condition off Java, 06°25'S, 111°25'E.

Atlantic
U.S. freighter West Jaffrey* is stranded off Half Bald Island, Nova Scotia, 43°36'N, 66°02'W, and wrecked. There are no casualties to either the merchant crew or the 14-man Armed Guard.

U.S. freighter Mary is damaged in collision with freighter Palimol at 24°50'N, 66°00'W, and proceeds to San Juan, Puerto Rico, for repairs.


“Living on the Tusket Islands, there was always a lot of salt herring and salt pollock. Butter and sugar were harder to get your hands on, and how much depended on the size of the family.” Frank was about ten or eleven at the time and recalls his father, Gordon Nickerson, rowing out in his dory to Outer Bald Island from their home on Deep Cove Island. “Gas engines were quite uncommon then”. Frank and his father went out to the wreck and got two or three dory loads of food. “The food was in gallon-sized cans, the labels had washed off in the wreck, but it was food you couldn’t ask for anything more. It was free food in wartime.”

The West Jaffrey had a lot of canned goods aboard and a freezer full of beef. Frank, thinking back to a few times when opening the cans, recalled: “One never knew what they were opening. You had to shake the can around and take a guess as to its contents. You would open a can that sounded like potatoes for supper and be stuck eating a gallon sized can of peaches that night. Once we opened what we thought was maybe tomato soup or something of similar texture and it turned out to be a gallon of fingernail polish. With not many girls on the island, especially none that painted their nails, we sent it to Candlebox Island the following week for the lighthouse keeper to give to his daughters”.

The polish would have been used to paint on the equipment as it would keep machinery protected, shedding the water off of it.

Going to the wreck, Frank recalls that all along the shore near the giant, grey, steel freighter were the crates that were thrown overboard. “Explosives were not something a lot of people knew about at the time. All that was left in the crates were little shavings of what appeared to be heavy sawdust but smelled sour. It was the remainder of the wet TNT. The children were picking up artillery shells on the shore and making bonfires and throwing the shells in and running. It took about five minutes for them to heat up enough to go off. They would climb up the ladder on the side of the ship and slide across the steel decks that were dripping of oil. The wheelhouse was quite big and had a lot of brass”. There were not a lot of things like compasses by the time Frank got around to the wreck as a lot of people had gone to the ship to get what they could. 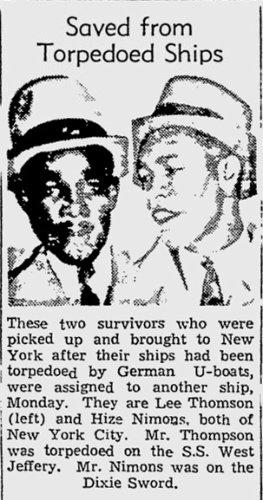 Lee Thompson & Hize Nimons,
both of New York City,
Two brothers who got out alive.
Don't believe the wartime hype;
the West Jaffrey ran aground,
& the Dixie Sword foundered on 12 Feb.
No torpedoes were noted in either incident.